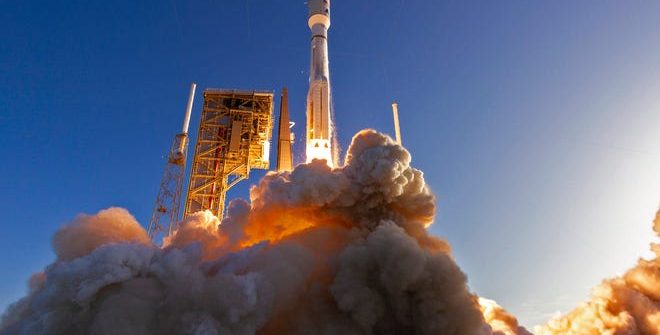 The reason was simple — they had played a part in helping it arrive safely.

United Launch Alliance operates a propulsion shop and test facility, as well as a fabrication site, at the Pueblo Memorial Airport Industrial area.

John Hochevar, a Pueblo native who is an engineer working for United Launch Alliance, said watching the Perseverance landing was, “a little nerve wracking because it’s worth a lot of money and it’s a big deal too.”

The successful landing Feb. 18 left him feeling “overall relieved, but we have a 100% success rate on our vehicles, so we’ve never failed yet.”

United Launch Alliance constructs rockets in Decatur, Alabama, and Harlingen, Texas, where the Atlas V vehicle that launched Perseverance in 2020 was built.

The Pueblo-based staff, which numbers 40 workers, did some testing to make sure the Atlas V was ready to go, according to Scott Messer, program manager for United Launch Alliance’s NASA Launch Services.

“The most important (thing) to the Mars mission is the ‘prop shop’ testing lab for the Atlas program,” Messer said.

“If we run into an issue with a part of some kind and we need to do some extra testing to make sure we are comfortable with flying the part then Pueblo can do some additional testing for us to make sure everything is good.”

In the case of the Atlas V’s responsibility for getting Perseverance to Mars, Pueblo engineers tested a busing connection.

“The busing connection has a lot of wires running into it and then it spreads those wires out to different points on the vehicle. At one point we had some concerns about the busing connectors we purchased from a supplier and so we asked the prop shop to do some testing at various thermal environments and different levels of vibration,” Messer said.

“We had to make sure that when they launched the Mars mission everything was going to be good and was successful —l and it was,” Messer explained.

The company launches, “a lot of really cool space craft for our customers, but without a doubt the Mars missions are the highest profile things that happen. Our vehicles have launched every Mars mission for NASA and nobody else has ever launched a mission,” he said.

Launching rockets to Mars since the 1960s

United Launch Alliance and its heritage vehicles started its Mars launching missions in the 1960s. NASA’s Mars 2020 mission with Perseverance was the company’s 20th to the red planet.

“We’ve been through this landing thing several times, but it is always super exciting and just a thrill to be a part of the program. I got notes from the Mars program manager in the days leading up to it detailing how grateful they were that we put them on a good path to get there.

“I suspect everyone in the company had their computers turned on and watching as the spacecraft went in through the 7 minutes of terror (the final descent through Mars’ atmosphere) and everything worked out good,” Messer said.

That entails final work on “very large 5-meter fairings, some of the largest fairings we have, that are launched on Delta IV vehicle and there’s some work done in one of our facilities in Pueblo, where we get the fairings ready to go for our Delta IV,” Messer said.

Up next is the final development of a Vulcan Centaur vehicle that will replace the Atlas V and Delta IV.

“It will go from two different product lines to a single product line. Right now we are on track to be ready to launch it for the first time in the fourth quarter this year,” Messer said.

Pueblo staff also are working on the Vulcan Centaur. Historically Pueblo workers once built the Delta II which launched many of the early Mars missions starting in November, 1996.

Since then, the production facility moved from Pueblo to Decatur in about 2000, Messer said.

“Being able to do something in the aerospace industry — specifically launch rockets is pretty cool to do in your hometown,” Hochevar said.

For more about the company’s history check out ULAlaunch.com.

Chieftain reporter Tracy Harmon covers business and Fremont County news. She can be reached by email at tharmon@chieftain.com or via Twitter at twitter.com/tracywumps.